It was at Belur Math that Swami Vivekananda (1863-1902), the foremost disciple of Sri Ramakrishna (1836-1886), lived the last years of his brief life. He consecrated the grounds in 1898 by worshipping the urn containing the sacred relics of Sri Ramakrishna, which he himself carried on his shoulders to the place of worship. On that occasion he uttered these prophetic words about Belur Math: The blazing light of universal harmony that will emanate from here will flood the whole world. On another occasion he said that the power that will have its rise from here [Belur Math] will flood the whole world and turn the course of men's lives into different channels; from this place will spring forth ideals which will be the harmony of Knowledge, Devotion, Yoga, and Work ... all true seekers of spirituality will in course of time assemble here. True to that prophecy, Belur Math has become the hub of a worldwide spiritual movement known as the Ramakrishna Movement. (Belur Math Website) 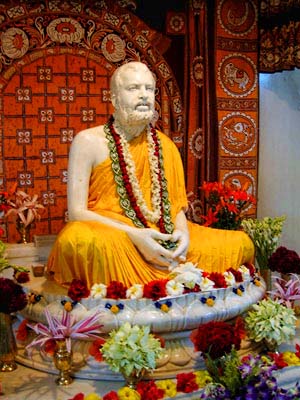 The Secretarial Office of the Headquarters of the worldwide Ramakrishna Math and Ramakrishna Mission is situated on the grounds of Belur Math. The work of coordinating and supervising the innumerable activities of the nearly 160 branch centers of the Math and Mission is carried on in this office by the General Secretary, assisted by four Assistant Secretaries. The Secretariat has various departments such as Central Office, Cash, Accounts, Investments, Audit, Law, Relief and Rehabilitation, Welfare, Construction and Maintenance, etc.

The Headquarters office also directly conducts a charitable dispensary, help to the poor (as monetary help as well as provision of clothing, tricycles, sewing machines to needy women etc.), relief and rehabilitation in various parts of the country (there are a few mission centers in Bangladesh also), Pallimangal - the Integrated Rural Development project with a focus on self-employment for rural areas, Veda Vidyalaya - for students who study and are guided in the ancient gurukula system, Ramakrishna Musuem - housing the various articles and artefacts associated with the Holy Trio and the other direct disciples of the Master, monastic retreats etc. 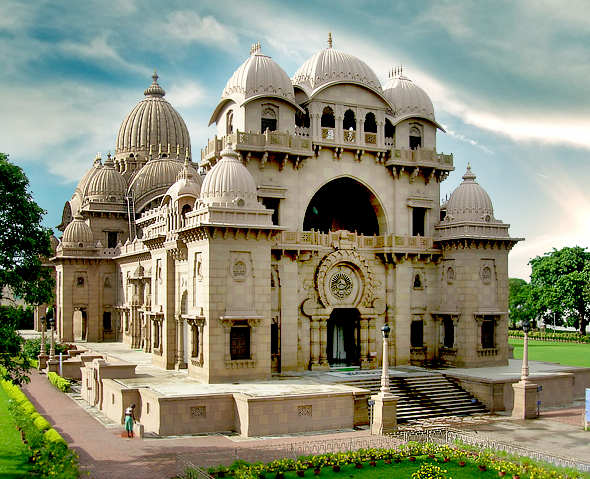 The young disciples of Sri Ramakrishna organized themselves into a new monastic order after the passing away of their Master, Sri Ramakrishna in 1886. The original monastery at Baranagar was moved in January 1899 to a newly acquired plot of land at Belur, in the Howrah distirct. This monastery, known as Belur Math, serves as the Headquarters for the world wide centers of the Ramakrishna Math and Mission and as the main pilgrimage spot for the many devotees of Sri Ramakrishna.


All members of the Ramakrishna Order undergo training and ordination at Belur Math. An aspirant, if found fit is ordained into Sannyasa and given ochre clothes to wear, after a few years. The following places belong to the main monastery:

Places to see at Belur Math :

1. Sri Ramakrishna Temple : Originally conceived by Swami Vivekananda, this temple was dedicated on 14 January 1938. It enshrines the sacred relics of Sri Ramakrishna. Architecturally, this temple has an important place among the modern temples of India. It incorporates the motifs of various religions, thus symbolizing the harmony of religions taught by Sri Ramakrishna.

2. The Old Shrine: It is situated to the north-east of Sri Ramakrishna Temple. This was the original shrine, where daily worship was conducted from January 1899 till the new temple was consecrated. This shrine awakens the hallowed memory of Swami Vivekananda and other direct disciples of Sri Ramakrishna who used to worship, meditate and sing devotional songs here.

3. Swami Vivekananda's Room: To the southeast of the old shrine stands Swami Vivekananda's room. In this room, the great Swami lived, and here he attained Mahasamadhi on 4 July 1902. Most of the articles preserved in this room were used by him at different places and times. In the courtyard in front of this room stands a mango tree under which Swamiji used to sit on a camp cot and meet visitors and devotees.

4. Swami Brahmananda Temple : Swami Brahmananda (1863-1922), whose place among the sixteen monastic disciples of Sri Ramakrishna is only next to that of Swami Vivekananda, was the first President of the Math and the Mission. The temple, which stands on the spot where Swami Brahmananda's body was cremated, was dedicated in 1924.

5. Holy Mother Temple: Overlooking the wide bathing ghat stands the temple of Holy Mother Sri Sarada Devi (1853-1920). The temple, built on the spot where her mortal remains were consigned to flames in 1920, was consecrated on 21 December 1921. Since the Mother loved the Ganga, her temple faces this sacred river.

7. The Samadhi Enclosure : The earthly remains of seven of the sixteen direct monastic disciples of Sri Ramakrishna were cremated here. Their names are engraved on the marble plaque which stands on this spot.

8. The Old Math: It stands further south on the bank of the Ganga. Holy Mother Sri Sarada Devi stayed here several times before the Belur Math came into existence. On the first floor terrace of the house, she performed panchatapa, five-fire austerity in 1893. Since the Ramakrishna Math was located in this house from 13th February 1888 to 1st January 1899 before it was permanently shifted to the present premises, it is known as the Old Math.

9. Ramakrishna Museum: In this Museum articles and artifacts closely associated with Sri Ramakrishna, Holy Mother, Swami Vivekananda and other direct disciples of the Master have been exhibited.