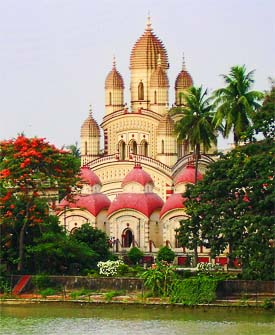 Devotees of Sri Ramakrishna know it to be his Leelasthan (place of His Divine Play). This is where he stayed for most of his life, where he practiced severe austerities, where he found his Mother, as well as the pinnacle of spirituality in every mode of religious worship that he undertook. The temples, the Ganga, the room where he stayed, the Panchavati, the bel tree, the meditation hut where he practiced Advaitic sadhana are all part of this huge temple complex. The Nahabat where the Holy Mother stayed is also a part of the complex.


(Visitors and devotees will be surprised to see the extent to which the temple complex has changed over the years. People and tourists abound this place, dust and dirt make it difficult to realize what a haven it was for spiritual seekers during the time of Sri Ramakrishna. But the room where the Master stayed has been well-kept and during the early hours of the day, is an ideal place for quiet meditation. Do read the Gospel of Sri Ramakrishna when you are here.) 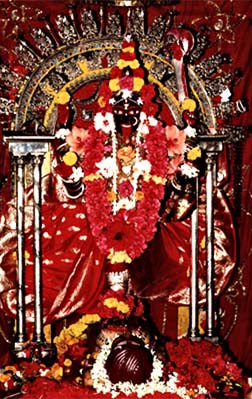 Rani Rasmani, the wealthy widow of Rajchandra Das, had a vision of the Goddess Kali who commanded her to arrange for Her worship and daily food offerings. Mother Kali promised the Rani that she would accept the worship done there everyday. The devout Rani immediately arranged for a plot of land to be bought on the banks of the Ganges and the construction of the Kali temple began. It was completed in 1855. Provisions were made by the Rani to cater to the needs of wandering monks and minstrels who stopped at the temple on their way from/to Gangasagar or Puri.

In addition to the main Kali temple, there are temples of Radha-Govinda (Krishna) and Dakshineshwar Shiva (12 in number). Built on a land which resembled the back of a tortoise in its topography, this is considered to be an auspicious place for the practice of spirituality in the Tantras.

A map of Dakshineshwar Temple and surrounding places 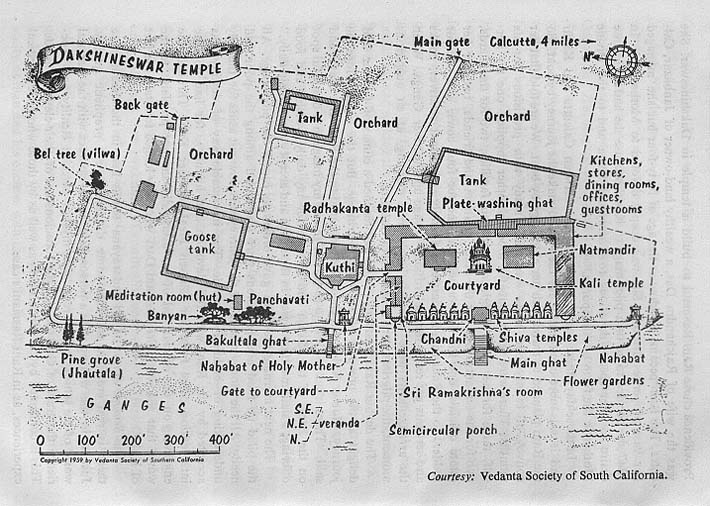