The history of Ramakrishna Mission Ashrama, Aurangabad dates back to 1981 when some local persons influenced by the teachings of Swami Vivekananda would assemble at a devotee's (Shri Balakrishna Patange's) house on Sundays for satsang. They read aloud excerpts from Gospel of Ramakrishna and performed evening arati which was played on an audio cassette player. Shri Patange also took up the responsibility of the sale of Swami Vivekananda's literature. 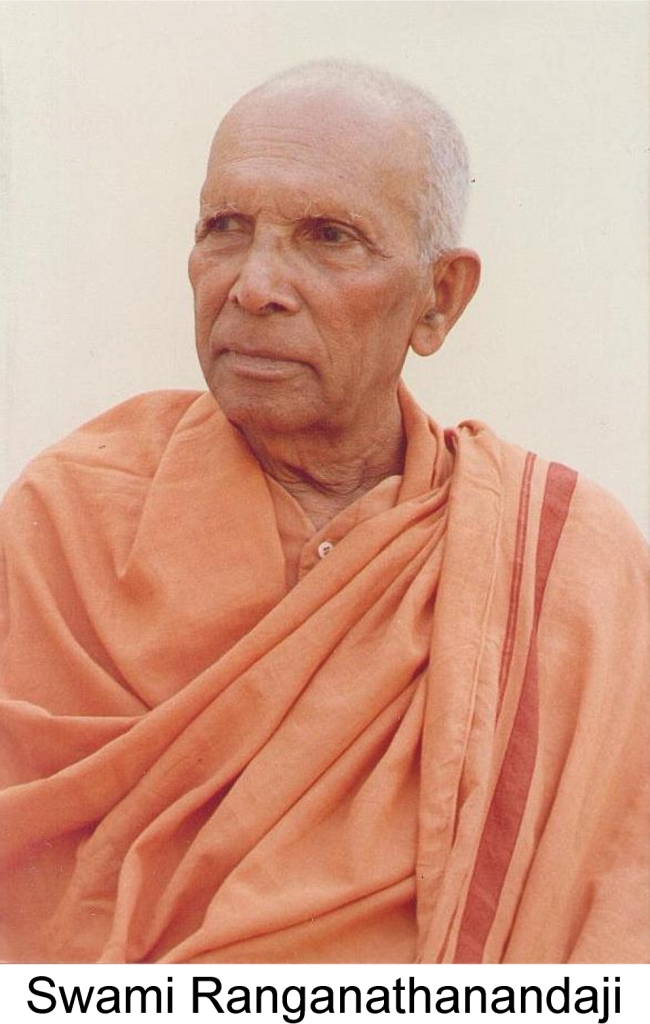 Revered Swami Ranganathanandaji Maharaj, the 13th President of Ramakrishna Math & Ramakrishna Mission, Belur Math visited Aurangabad in the middle of 1982. He repriminded one of the devotees (Shri Prabhakar Yatnalkar) that you call yourself initiated devotees and do not doThakur's work in a concrete manner. He also remarked that propogating Thakur's message and teachings was not the responsibility of monastic's alone. He suggested that devotees should meet more frequently to evolve something positive and long lasting.

In the winter of 1982, Revered Swami Chidbhasanandaji Maharaj from Belur Math came to Aurangabad and suggested that the local devotees should constitute a formal trust in the name of Ramakrishna - Vivekananda to begin with. He told them to organize public lectures, celebrations and sale of literature more actively. Accordingly, 'Sri Ramakrishna Vivekananda Seva Samiti' was formed under the guidance of Revered Swami Vyomarupanandaji Maharaj (the then President of Ramakrishna Math, Nagpur) and was duly registered in the Charity Commissioner's Office on 5th January 1983, the Tithi puja day of Swami Vivekananda.

The real impetus for Ramakrishna -Vivekananda Bhavadhara came in April 1985 when Revered Swami Atmanandaji Maharaj delivered two public lectures in Aurangabad. He told the devotees to buy a piece of land for the Ashrama and assured them that he will come to Aurangabad in the future to deliver more lectures. It was upon his suggestion that the title of 'Sri Ramakrishna Vivekananda Seva Samiti' was changed to 'Sri Ramakrishna Ashrama, Aurangabad'.

Subsequently, the venue of the activities was shifted to Shri Prabhakar Yatnalkar's house in Kotla Colony on Adalat Road. A weekly satsanga was also held on Thursdays in addition to Sundays in which about 15 to 20 devotees would participate. Shri Yatnalkar also conducted the official work of the Ashrama and the sale of literature from his house. An evening counter for sale of books was also arranged in Varad Ganesh Mandir in Samarthnagar area of the city. Subsequently many senior monks of the Order like Rev. Swami Vyomarupanandaji Maharaj, Rev. Swami Akamanandaji Maharaj, Rev. Swami Bhagwatanandaji Maharaj and Rev. Swami Vishnupadanandaji Maharaj addressed public meetings on several occasions. Thus 'Sri Ramakrishna Ashrama' gradually became known to the people of Aurangabad.

By now, the devotees and the visiting monastics intensely felt the need to expeditiously acquire a land for the Ashrama. The devotees came to know in 1987 that Shri Chandragupta Chaudhari, a local communist leader possessed a piece of land in the southern outskirts of Aurangabad. They approached him to sell a portion of his land for the Ashrama. They presented him a souvenir of the Devotees Convention held in 1980 at Belur Math, to introduce him to the Ramakrishna Movement. When he learnt that his land is required for establishing the Ashrama based on the idealogy of Ramakrishna - Vivekananda, he agreed to sell it at a modest price. Two acres of the said land was purchased from him at a price of Rs One Lakh (the prevailing market price was Rs 6 lakhs per acre). A major part of this sum came through the contribution from Shisode family. The ground breaking ceremony for the proposed Ashrama building was solemnised at the auspicious hands of Rev. Swami Bhaumanandaji Maharaj and Rev. Swami Atmanandaji Maharaj. One acre land adjoining the present two acres land of the Ashrama was purchased later from the same person at market value. Thus the total land for the Ashrama became three acres.

The Ashrama land had several mango and neem trees. This land was far away from the main city and was not habitated. Hence it was difficult to protect the premises. Some unknown persons cut down the mango trees and stole the wood. Hence to guard the Ashrama property stone fencing was done and a watchman was appointed. A borewell was dug and a motorized pump was fitted for the supply of water to the Ashrama. Rev. Swami Tattwajnananandaji Maharaj (Principal, Shilpamandir, Belur) drafted a master plan for the Ashrama at the behest of Rev. Swami Smarananandaji Maharaj, the General Secretary of Ramakrishna Math and Ramakrishna Mission, Belur Math.

In 1991, some of the local trustees of the Ashrama went to Hyderabad to seek blessings from Rev. Swami Rangnathanandaji Maharaj. He enquired affectionately about the progress of the Ashrama and gave his wholehearted blessings with a token donation of Rs 150/-.Rev. Swami Nikhilatmanandaji Maharaj visited Aurangabad on quite a few times for three years consecutively and gave public discourses on Tulsi Ramayana in different temples in the city.

Rev. Swami Yogatmanandaji Maharaj of Ramakrishna Math, Nagpur conducted spiritual retreats in the Ashrama premises mostly under a tree twice a year. This resulted in local people knowing about the new location of the Ashrama and its idealogy. About 50 to 60 devotees would attend these retreats. The ground breaking ceremony for the building of the Ashrama was held in August 1992 on the birthday of Swami Niranjananadaji Maharaj at the auspicious hands of Rev. Swami Bhaumanandaji Maharaj and other monastics accompanying him. A pandal was specially erected for this event. Curiously enough, after all the people dispersed, it poured heavily and it continued for two days.

Almost from the beginning (i.e. from 1983), many monastics of the Ramakrishna Order (about 10 to 12 in every six months) mostly from India and some from abroad came to Aurangabad to visit world heritage sites of Ellora, Ajanta and other places of historical and religious interest. They were looked after by the Ashrama. During their stay they would give discourses on the request of the devotees.

The Ashrama building gradually came up by 1994. The constructed area was almost 6000 sq ft. Subsequently all the activities of the Ashrama were shifted from Shri Yatnalkar's house to the new building and now weekly satsangs were held in the new premises. The Ashrama was far from the main city and there was a problem of availability of local transport facilities especially in the evenings. For this reason the timings of the satsanga activities were shifted from evening hours to morning hours.The devotees brought their tiffins on Sundays and shared them after the retreat. Thus they virtually spent the whole day in the Ashrama.

Major basic amenities were by now available in the Ashrama premises. A new road (Beed bypass) in front of the Ashrama was constructed during the same time. Due to this facility the Ashrama became relatively more accessible. It was decided to formally install the photographs of Sri Sri Thakur, Holy Mother and Swamiji in the Ashrama's shrine. The installation ceremony was held in April 1995 and was organized under the guidance of Rev. Swami Bhaumanandaji Maharaj. This ceremony was held from 23rd to 25th April 1995. Rev. Swami Gahananandaji Maharaj, the Vice-President of Ramakrishna Math & Ramakrishna Mission was specially invited to solemnize the installation which was held on 24th April. About 85 devotees received their initiation on 25th April 1995. This function (23rd to 25th April) included discourses, bhajans, distribution of bhojan prasad etc. Rev. Swami Bhaumanandaji Maharaj, Rev. Swami Nikhilatmanandaji Maharaj, Rev. Balai Maharaj, Rev. Pinaki Maharaj and other five sadhus were special invitees. About 400 people attended the function. Thereafter more people started coming to the Ashrama to attend the annual celebrations. A library was opened in the Ashrama.

In 1998, Mr Bakliwal, the owner of the plot adjacent to the Ashrama land sent a legal notice to the Ashrama about encroachment on his land area. He suspected that the Ashrama's newly built compound wall had encroached upon his land. After scrutiny it was found that it was not the case. Apprehending that a prolonged litigation might delay the affiliation which was in the offing, the Ashrama authorities felt it prudent to settle the matter expeditiously and amicably. Accordingly, it was mutually decided that a plaque acknowledging his land donation to the Ashrama admeasuring 03 R (valued at Rs 301000/-) be fixed prominently.

A free coaching class for poor deserving school children from 1st standard to 10th standard was started in 1998. Mrs Anjali Jinturkar, a lady devotee volunteered to conduct this activity. It is continuing smoothly since then.

Rev. Swami Prabhanandaji Maharaj came here to visit Ellora and Ajanta caves and Ghrishneshwara temple. His discourse was arranged for the general public. Rev. Swami Brahmeshanandaji Maharaj from Chandigarh Ashram conducted a one day spiritual retreat in the Ashrama on Patanjali's Yogasutras. He also gave public talks in the local medical college and a local auditorium.

A souvenir containing articles by prominent sadhus was published in 1997 for generation of funds. About Rs one lakh eighty thousand were collected through this endeavor. The money was deposited as a corpus for the Ashrama. Funds were also raised through organization of book exhibitions and sales in local fairs, festivals and industrial exhibitions.

Around the same time a weekly free dispensary was started in the Ashrama on Sundays. The medical service was inaugurated by Rev. Swami Satyarupanandaji Maharaj of Raipur Ashrama. He came consecutively for 5 years (2000 - 2004) and delivered public discourses on Bhagwadgita in Vivekananda College and other public venues.

In 1999 a band of young male devotees formed a satsang group. They would gather on every thursday evening at a devotee's house by rotation and conduct a satsang for an hour. Each satsang had vedic shantipath, a short meditation, reading from Ramakrishna - Vivekananda literature, stotra chanting and reading its meaning and bhajan singing. They would disperse after taking prasad. The host's family and their neighbours would actively participate in this weekly satsanga. This activity continued almost for 6 years. The same group of devotees conducted satsanga in the Ashrama on Sunday mornings between 05 am to 10 am. Both these activities continued till the affiliation of the Ashrama.

In 2002 a new temple of Sri Ramakrishna was consecrated in Pune. Many monastics from India and abroad had attended the function. Out of these about 200 monastics had come to Aurangabad to visit Ajanta and Ellora caves and Ghrishneshwar Jyotirlinga. The Ashrama made all the arrangements which included lodging, boarding and visits to these sites. The devotees took keen interest to make this event a memorable one.

Essay writing competitions for school students in commemoration of Swami Vivekananda's Birth Anniversary Celebrations were begun in 1990 and were later also held in the local colleges from 2001.

Due to the local Managing Committee's efforts the segment of the highway near the Ashrama was named as Ramakrishna Ashrama Marg.

During this period another programme was organized in which Rev. Amoghprana Mataji of Sri Sarada Mission Ashrama gave a discourse on 'The Life & Message of Holy Mother.'

The legal process of affiliation began after receiving the gracious nod from Belur Math. The gifting of the Ashrama property to the Headquarters involved a stamp duty of Rs 15 lakhs. Raising this huge amount was a major hurdle in the affiliation process. However, this problem was solved with the intervention and help of many government officials and other influential people including the then Governer of Maharashtra. Finally the matter was settled after payment of Rs 200/- on a bond paper on the instruction of the Charity Commissioner of the region. Thus the major legal hurdle was overcome.

Special mention must be made of Shri Prabhakarji Yatnalkar and Shri Sudamrao Shisode who with their full family support endeavoured tirelessly and enthusiastically for the all round development of the Ashrama. Shisode family was involved especially by contributing monetarily and articles whenever required.